Heya everyone.
Raizu is here with the new chapter of Takami no Kago.

I also brought a good news. A new translator has joined us for Takami no Kago project.
He gonna deliver the next chapter as his first work.
Yay!

Author’s Note:
I included the illustration of the tournament chart.
Please have a look if it’s within expectation.

In the end, I was able to avoid meeting Lux in the first round.
However, I was paired with the [Gale Hero] who was just as troublesome as Lux.
Somehow, although I knew it was rigged, the tournament’s first round matchups actually ended up being the winners of the qualifying round versus the seeded participants, so I guess there wasn’t a need for the behind-the-scene manipulator to change it too much.

I was going to have to win three times in order to meet Lux.
If I didn’t manage to defeat Lux, I’ll end up getting the prize for third place, which was what I actually wanted.
There were a lot of names here.
Since I couldn’t memorize all of them, I’ll just write down the things that I’d need to take note of after seeing the tournament chart that was distributed for free to the participants. 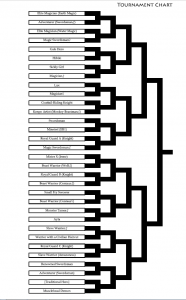 There were quite a few races that I only saw now for the first time.
The mainstay of fantasy, like the ‘Elf’, and a pair of centaurs.
There is even a Mr. X who was indispensable for a tournament like this.
Of course when I checked their status, their real identities were shown.
I suppose the royal family had deliberately opened up a position for Selva.
Because a lot of the royal guards had also appeared, and since she was most certainly Selva’s favorite warrior, Irene would most likely be half crying after being requested to go.

Apparently that demon wasn’t the last of them. One had shrewdly advanced to the main tournament.

Lux appeared with the tournament chart in his hand.

“I’ll be able to fight Hibiki in the semi-finals.” (Lux)

It seemed that Lux was just confirming with me.
I’m just glad that I don’t have to win a fight against Lux, but on the contrary, Lux seemed to be really looking forward to it.

“But before that, I have to defeat the [Gale Hero] in the first round.” (Hibiki)

Lux said so without any hesitation in his voice.
It’s good that the [Gale Hero] wasn’t around. Otherwise, I have no idea what kind of tantrum that guy would throw at us.

“Well, I have to do it. Cause I want to get the prize reward.” (Hibiki)

I shrugged my shoulders as I replied to Lux.
The main tournament would start tomorrow, so it was actually alright for me to go home now.
Meanwhile, the remaining participants seemed to be more intent on observing their surroundings in order to gather even a little bit more information.

Without concern for such things as the atmosphere, Lux also decided to move away from there.
Of course, hero-sama’s nerve was different from those people.

When I left the square, Amy, the untransformed Ayla, and Jill alongside with Kuesu and co. were already waiting in the audience seats.

Kuesu noticed our arrival when Lux called out.

I caught this weird vibe coming from Kuesu when she’s around Lux.

“I’m not that tired. I was just watching the match after all. It’s Hibiki who might feel tired.” (Lux)

Kuesu approached us afterwards.
In that instance, Ayla, Amy, and Zir converged around me.
It was only Kuesu, so I was quite surprised at it. Perhaps it was just for precaution.

“I’ve seen the tournament chart. Tiger will be your next opponent, right?” (Kuesu)

“Tiger is short-tempered but his magical talent is amazing.” (Kuesu)

If Kuesu said so then he must be a very good magician.

“Well, I’ll try not to strain myself. It’ll be just fine.” (Hibiki)

“Right, please be careful with his various uses of wind magic.” (Kuesu)

Thanking my master, I stroked Amy’s head, who was standing intimidatingly between me and Kuesu, to settle her down.
Looking at that, the two who were huddling around me also presented their heads to me.
Alright alright, I’ll stroke your heads too.

“You guys are getting along really well, eh?” (Baara)

Baara chuckled upon seeing that spectacle.

“Better than having a bad companion.” (Hibiki)

“By the way, Hibiki. That last move was truly impressive.” (Gary)

Gary started to talk about the qualification round.

“I was just lucky. When there were only four of us left, the rest were exhausted already.” (Hibiki)

“True, two out of the four couldn’t handle the pressure and lost their concentration.” (Gary)

It’s good that they interpreted it that way.

Seira who remained silent up to now finally opened her mouth.

I agreed because it was more convenient for me.

But of course, this girl took that the opposite way.
Whatever I said would end up provoking her anyways.

I ignored Seira, and went to ask where I could get a nice meal.

Just a passing-by translator, who happen liking isekai novels. Return of The Former Hero is one of my favorite novel. I hope I can deliver the joy of liking this novel to you all.