I blame the (adopted) parents. 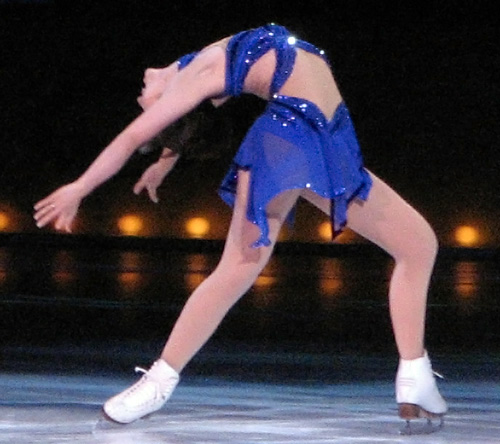 In figure skating, there is a move known as the Ina Bauer, as seen above.

Incomprehensible. Though I was going to be the one doing the tearing off, why was mine torn off instead? It’s strange. I feel like I’ve caught a glimpse of a mystery of the world. Therefore, please contain your anger, I’m seriously begging you, Demon King-sama.

It’s that. Talking about breasts in front of the Demon King is taboo. Probably height as well. Since she’s small. Speaking of this amounts to risking one’s life, no doubt. I’m too afraid to speak about it.

Well, whether they’re torn off of whatever, they can be restored easily enough, but the Demon King’s eyes at that time gave me this unfathomable fear. That expression in her eyes somehow feels like something that could come from the pages of a horror manga. Dangerous, dangerous. Those eyes belong to someone who has already killed people. Ah, I’m sure the Demon King had the Human Slaughterer title or similar. For her, killing is normal.

Dammit. I was told by the Demon King not to take revenge upon the boobian, so just how can I vent this rage which has nowhere to go?

「No monkeys! I don’t want anything to do with monkeys again!」

While screaming about monkeys the moment she saw my face, vampire girl attempts to flee. How damn rude. Don’t think that you can escape from me, okay?

I immediately catch hold of vampire girl as she tries to flee. I seize her by the scruff of the neck, preventing her escape. As she still tries to move her feet despite that, vampire girl gets magnificently bent over.

Hmm. I look down at vampire girl’s body, while she thrashes around with her face forced up. She’s big as well. I’m not going to say where, but she’s certainly bigger than me. Shall I tear them off?

Perhaps she sensed my threatening mood, as vampire girl started crying while struggling. Umm, you’re too old to be crying still. Somehow, doesn’t it seem like she’s regressed to a baby? Is she going to be okay?

「What is occurring here?」

Maybe she heard vampire girl crying and shouting, as Felmina-chan walks in. Because of which, the moment she sees the unsightly state that vampire girl is in, she snorts in amusement. O… kay. It somehow seems like her gaze is totally showering vampire girl with contempt.

Perhaps her meagre pride was triggered, as she suddenly stands up straight as if her unsightly loss of self-control had never happened. But you know, I still have her by the scruff of the neck after all, so she’s almost in a silly Ina Bauer pose. On seeing that, Felmina-chan has a scornful smile again, and vampire girl’s face instantly turns red. You guys sure get along well huh.

「Erm. What’s with this situation?」

Once again some new guests arrive. Oni-kun and Mera. I thought it was an odd combination for a moment, but come to think of it since the two of them are having to take part in various discussions about the reorganisation of the armies it’s not strange for them to be meeting face to face I guess. Unlike the other armies, Oni-kun’s group and Mera’s group aren’t going through any large-scale replacements, but they still do have some minor adjustments taking place you know.

Mera spoke, unable to simply watch. Taking a look at her, her red face is gradually turning pale. Vampire girl is struggling quite seriously after all, so in turn I’ve kinda had to put a decent amount of strength into my grip on her neck. Though I’m gripping her from behind, it seems that I’ve stopped her breathing and her blood circulation.

While I’m sure she won’t die if I continue to keep my grip up, it seems like it could become troublesome so I reluctantly let go. After she suddenly becomes free when her body had been bent like a prawn, naturally vampire girl’s body succumbs to gravity and meets the ground. Since it was head first, she made a pretty decent “thud”. With tears in her eyes, vampire girl is now lying sprawled with her arms and legs outstretched. OMG, this is such fun.

The three people who saw me torment vampire girl, each have their own particular reaction. Despite having an expression that says “serves you right”, Felmina-chan’s cheeks are twitching. It seems like she’s filled with trepidation in her innermost thoughts that maybe one day she herself might be targeted with such treatment. Don’t worry, don’t worry. I won’t do it, I won’t do it. Almost certainly. Probably. Maybe. I think.

Despite being shocked, oni-kun has an expression indicating that he has nothing he can say. However, I can sense a reproachful look towards me in his eyes. Yup, you want to tell me not to do things that people hate, right oni-kun? Don’t worry, don’t worry. With repeated “training”, eventually even bullying can cause feelings of ecstasy, as stated in bondage-type adult games. As for whether is vampire girl is actually an S or an M, I think she’s an M.

Mera might be expressionless but his face is full of affection, as if he is a nursery teacher watching children frolic about. Are you her guardian? Yup, he is. Mera-san, hey Mera-san? This girl has grown up to be quite pitiful, but are you really okay with taking such an indulgent stance? Umm okay, so it was me who forced her into such a shameful scene though.

Vampire girl slowly stands up, dusting down her clothes. After deliberately clearing her throat, she turns around with a straight face.

「Goshujin-sama, when you have some task for me then please call out to me normally.」

What are you spouting off about when you’re the one who tried to run away the instant you saw my face, before I even had a chance to call out to you. It seems she wants to pretend that the shameful scene just now never happened. Well, it was fully witnessed by more than half the people here though.

But still, a task, huh. Actually, a task came up while this little comedy skit was taking place.

I lay a hand on vampire girl’s shoulder. And then, we teleport. Our destination, is Natsume-kun’s location.

「……Goshujin-sama, if you have some task for me then please actually call out to me normally.」

Vampire girl is saying something but I ignore it. On hearing that voice, two people who were originally in this room turn around to face us. One is the owner of this room, Natsume-kun. The other is imouto-chan.

However, there is another person in this room, sitting on a chair. That person is staring into empty space with a vacant expression. That person is Hasebe-san, a candidate for becoming the next Saint.

Yup. They actually made a move on this girl who is under the auspices of the Divine Word Religion. The face of the pope comes to my mind. Another fine mess, perhaps.

“Today’s sacrifice is the well-known vampire girl-san” – this spoken is a formal manner, like an announcer introducing someone.

“bent like a prawn” – in the dictionary I used it said that the phrase used here means “holding out one or both hands and arching one’s body backward like a shrimp (in kabuki, represents being overwhelmed by someone’s power)”.