The next morning, after I was done putting on my outfit, I met up with Olga-chan near the girl’s dormitory and headed to the staff room, where we found Beatrice-san alone.

「Umm … Where are the other teachers?」

「Everyone else has already gone to their classes.」

I’m sure I checked the time before I left the dorm, but am I really that late by any chance?

As I suddenly felt uneasy, Beatrice-san laughed then told me.

「It’s alright. It’s just, at this time of the year, every class are holding special training sessions early in the morning.」

「Special training huh…. what is it for?」

「At this time of year, the whole school, as a whole becomes a lot more lively and active. For example, if we are talking about the next upcoming event, it will be the In-School Tournament. Therefore, in a bid to win against the other classes, everyone started their special training.」

「Eeh!? Doesn’t that mean our class should start that as well!?」

「That should be the case, but since Seiichi-san and the rest just arrived, I wasn’t able to arrange it … I’m sorry.」

「No, the blame is on us! I’m sorry for coming in at such a busy time!」

「It’s alright. It’s all the principal’s fault after all.」

Beatrice-san said so with a very pleasant smile. Sorry, Barna-san. You’ll probably get blamed for a lot of things, one of these days.

「But still, in order to gain experience no matter how little it is, we have to do our very best. What shall we do? Should we begin the special training tomorrow?」

「Let’s see … For things like this, the sooner the better, so let’s do that.」

「And with that, let’s inform them during today’s homeroom.」

After saying that, Beatrice-san started compiling the materials she had on hand.

「This? These are the handouts that I have individually tailored for each of the students in Class F.」

「As I had said earlier, it is really busy at this time of the year. Once the In-School Tournament concludes, the yearly exams are held.」

「Eh? But, didn’t you just return the test answers the other day?」

「That was only a class quiz. However, this time it is different, class F has so many unique children after all…」

Beatrice-san looked at a distant place. Yeah, mainly Agnos and Leon … or rather, only those two.

… Wait, not only them! What about Saria and Rurune!? They’ve never studied have they!? Especially Rurune, she’s too worrisome…!

「Umm … what about Saria and Rurune?」

「About that matter, please rest assured, Saria-san and Rurune will be exempt from the test.」

「I see … Come to think of it, you said handouts that have been individually tailored… 」

「Yes. I’ve prepared handouts that summarized the subjects that they’re good and bad at for each of them, I always distribute it every time we have an exam.」

I honestly thought that Beatrice-san’s work was truly amazing. Sure, the students under her were few in number, but a teacher who’s willing to make handouts for their students personally are rare, even back on Earth.

Rather, I noticed it when we were chatting casually, but before I knew it, I became someone who gives the test rather than someone who takes the test, huh … how do I put it, it’s not like I’m the one who constructed the test, but looking at everyone suffering from it is … oh no, it’s a bit interesting.

As I was being exposed to a glimpse of a side I should’ve never known, Beatrice-san finished tidying up the materials.

I have to make sure my efforts are comparable to Beatrice-san’s hard work. While thinking that, a group of students and their teacher, who probably just finished their special training were walking back from the opposite direction as we were heading to class F. While we stood by the wall to let them pass, the teacher from their side stopped before us.

The teacher had silky, light ocher-coloured hair, which was cut slightly above his shoulders and eyes of the same colour; I think he’s quite a good-looking guy overall, but I am quite concerned about the way he smiles. For instance, Blued was an ordinary ikemen, but I felt something really repulsive about this guy. He dressed in a lavishly decorated red cloak, beneath which was what appeared to be a military uniform. …

Huh? Where have I seen that uniform before … Aah, it was from my date with Rurune back in the Capital, Terveil, when we were in that Binge Eating Competition, that Shoshark participant who came from the Kaizer Empire wore the same garment.

Does that mean, this teacher came from Kaizer Empire?

Suddenly, as I was musing over that, the teacher in front of me deepened his smile.

「My oh my, just when I thought who it was … is it not Beatrice-sensei who dreams about the incompetents.」

Eh, what? What’s with this guy who needlessly explains things?

「…Good morning, Cliff-sensei. With all due respect, they are by no means incompetent. Please correct your statement.」

Beatrice-san firmly said so while frowning a little, after greeting him. However, contrary to Beatrice-san’s feeling, the teacher approached her.

「Yare yare … You’re also quite the stubborn person. What’s wrong with calling incompetents as incompetent? Just discard those incompetents aside … How about it? Join me for dinner tonight…」

「Please allow me to refuse your invitation.」

「…I see …The members of Class F who have made Beatrice-san do so much must be oh-very excellent. They ought to bring good result at the In-School Tournament and Yearly Exams.」

The moment that teacher said so, the students from his group who were waiting slightly further away started to giggle.

Rather, Beatrice-san did mention that she longed to have lunch together with other teachers, but she’s still being hit on as a woman. Well, she’s a beauty, after all, it is no wonder. She also seems to have been invited so many times before, but considering the other party … yep, I feel she refuses him mainly because of his personality!

Meanwhile, the teacher bit his lips in chafe, placed his fingers on Beatrice-san’s chin and raised it. Isn’t this is the so-called Ago-kui? The one that was popular on Earth some time ago.

「You can only dream for those incompetents, for now, you know? You’ll see the reality soon——」

「Umm … is that hand necessary?」

I unconsciously grabbed that hand and pulled it away from Beatrice-san. He momentarily became startled, before glaring daggers at me.

「Who are you? Impudent … You act like that while knowing I’m a noble from Kaizer Empire?」

「No, how would I know about that? This is my first meeting with you… 」

Ah, don’t tell me, he’s actually some big catch that I don’t know of? Rather, so it was spot-on when I guessed he’s from the Kaizer Empire.

Well, putting such a thing aside….

「 Do you need to lift your opponent’s chin in order to speak with them?」

When I heard a small voice burst out into laughter beside me, I automatically turned my head and saw Olga-chan holding her mouth with her two hands while trembling in humour.

At what I pointed out, the teacher’s face turned bright red. But, as soon as he regained his composure, he spoke up in an arrogant manner.

「Phew … To think I got a little bit worked up. That being said … Jealousy is ugly, is it not. No matter how unsightly your face is, would it not be weird to complain about my conducts?」

Olga-chan, your laughter is not contained well enough.

「No, no, your behaviour is weirder if you think about it normally, you know?」

Eh, did I say something wrong? Like, isn’t it weird to do a Kabe-don or Ago-kui so suddenly? However, if we’re going to limit it to ikemens, then Shota, or even Blued, it’s more proper for them to do it ….

When I unintentionally said my thoughts, maybe because she could no longer hold herself back, Olga-chan was on the ground hitting the floor with her fists. That reaction is cute. But stop it, it’s rude after all.

「What nonsense are you spewing …! How about you, who the heck are you!?」

「Um, about that … He’s Seiichi-san who’s currently in charge of class F.」

「What? …Aah, he’s one of the new teachers that the principal said before…」

After Beatrice-san introduced me to him, he examined me from top to bottom then snorted.

「Hah. To think such a shabby person is a teacher … this academy sure has fallen.」

Is my appearance shabby? … this is equipment with the highest rank, though….

Since my 『Clairvoyance』 hasn’t activated, it means the opponent didn’t use 『Appraisal』  on my clothes. Is he unable to use the Skill 『Appraisal』? Or is it unnecessary to use it in the first place?

「In-School Tournament… seems like we can beat them down easier this year. No, before that, isn’t it doubtful whether they could participate? Just by participating, they will bring shame to themselves after all!」

After saying so, the students around us started laughing all at once.

「Hn. You can’t say anything back, do you? It is a fact after all. …Uh-oh, I said a tad much. Well then, I will excuse myself. At any rate, unlike you, we are busy.」

Maybe because he no longer had anything he wanted to say, the teacher took his students along and left, looking satisfied with the conversation. Among the students, a blonde student who somehow resembled Blued glared daggers at me for some reason. Did I do something?

When I was thinking such a thing, Beatrice-san apologetically said.

「Ah, no, please don’t mind it. I simply didn’t understand his behaviour. By the way, who’s that person?」

「He’s Cliff-sensei, the one in charge of class S, the class that consists of only highly performing students. I really am sorry … I’ve even let Seiichi-san taste a bitter experience.」

「It’s completely okay. Ah, shall we go to the classroom too? It’s about time for homeroom, isn’t it?」

For some reason, Beatrice-san looked at me in shock.

「Umm … is that all? He insulted you to that extent, you know?」

「…Doesn’t that make you frustrated!? I don’t care how much he makes fun of me. But … I can’t forgive anyone who ridicules the students from class F…!」

「Frustrating or not, it has nothing to do with us, does it?」

「We know that everyone from class F is excellent, and Cliff-sensei doesn’t know that they’re excellent. That’s all there is to it.」

「It’s fine isn’t it. I’m not interested in both class S students and Cliff-sensei in the first place, and it’s not worth my time to be concern about those whom I’m not interested. All I’m going to do is to make everyone from class F get stronger.」

Beatrice-san was stunned at what I said.

「I won’t say that you don’t need to mind what other people say. It’s also important to be evaluated. However, I’m not that immature to deal with everyone who comes to make fun of me, and moreover, it’s troublesome.」

「…They kicked up a fuss by themselves.」

Said Olga-chan with a murmur.

「Well, therefore, we only have to face everyone from class F with everything we’ve got, don’t we? Ah, I’m sorry for saying something oblivious…」

「Exactly. It’s okay, Beatrice-san. I’m sure everyone from class F will respond to our feelings.」

While continuing that conversation, we began striding back to the classroom.

However, as we weren’t paying attention, we didn’t notice that there was someone nearby who had overheard us. 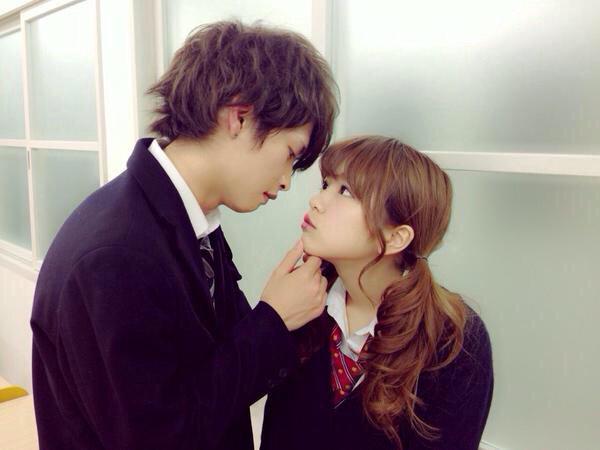