Skip to content
HomeMotoyuushaReturn of The Former Hero ch.120

Here comes a new chapter of Motoyuusha in the new RTD site.

Leon and I finally met in the finals. We were facing each other on the stage with serious expressions.

30 minutes prior, Tanya turned towards me who had came out from the first aid room and said “By the way, is this part okay?” while patting my nether regions. It made Aura, Leon, and I speechless.

…it was not like I could do anything about it.
That was what I would like to think.

It was a fact that I appreciated Tanya’s offer so I couldn’t get angry at her.
More like, we would’ve gone at it if it were only the two of us.

…no, it was fine already. Let’s forget that.
There was no way that there would have been only the two of us.

Before the start of the final match, the noisy venue was gradually becoming quieter.

“Everyone, I’m sorry to have made you wait.”

The voice of the host echoed in the venue.
With that, the venue fell silent.

“…now then, the final match of the Odysseus Tournament… begins!”

With the announcement of the beginning of the final match, the silent venue turned excited at once.

In the midst of the cheering shouts, Leon and I quietly pulled out our swords.

We ran towards each other at the same time so the distance shortened immediately.
And then we slashed at each other with our best blows.

Our swords clashed in what could be called a greeting with the power which would’ve decided the match with a single blow. That amount of power made the swords resonate with shrill sounds.

The impact of our swords was too high.

The moment when our swords crossed again, a crack line formed on both of Leon’s and my sword blades.

I was surprised at the spectacle.

My concentration wasn’t on the final match anymore, the “Uwaa, this is bad!” feeling had surged in.

Even Leon would’ve probably found it inconceivable that a holy sword could get chipped.

We clashed our swords against each other.

After that, I stopped my movements while I was thinking of that.

I went to apologize to Leon.

That blunder of mine made the Holy Sword which was important for the Demon Lord subjugation crack which left me shaken.

However, Leon was unlike his usual self.

He hadn’t missed the gap when I stopped my movements. He turned his body by using the power of his sword swing and kicked me in the gut.

I received Leon’s kick straight on and got blown off backward.

Had Leon really not noticed that the Holy Sword got cracked a little while ago?

No way. No way it was really happening, right?

I fell down on the backside of the stage.

I took a stance to get up right away but countless light balls were approaching me when I raised my face.

This was the magical energy bullet emitted from Leon’s Holy Sword, the Light of the Holy Sword.

The magic was brighter than it was in the past and I could sense that the power had obviously increased.

I rushed to jump sideways and dodged the Light of the Holy Sword somehow.

However, another Light of the Holy Sword had already approached me again.
Honestly, I was surprised with its power of rapid-fire.

And yet, I was barely able to dodge it and those that couldn’t be dodged were knocked down with my sword.

After barely managing to evade it, there was no room for me to either catch my breath and prepare my sword stance nor straighten my posture.

As a result, I was unable to evade and got hit in the end.

*Don!* The mass of magic exploded in front of me and the impact assailed my body.

Although there wasn’t major damage because it was a single shot, but my left shoulder still ached.

And when my stance staggered, Leon came approaching with a bloodshot expression.

With the damaged Holy Sword he slashed a sharp blow as if he hadn’t cared about it at all.

I couldn’t dodge it.

Having judged it so, I casted magic which I had somewhat imaged while moving to avoid the attack.

Although the power was somewhat lacking because the image was crude in some aspects, but I somehow managed to invoke it.

And then it exploded in between me and the attacking Leon, right in the front of me.

Regardless of its power, the explosion erupted loudly and when the smoke cleared, Leon and I took a short distance, faced against each other and set up our swords again.

Although Leon became a bit sooty because of the small explosion from the Flame Bullet – Fireball, he was pretty much uninjured.

Meanwhile, I had received a light injury from the left shoulder to the chest after being slashed by Leon’s Holy Sword.

Even after Flame Bullet – Fireball exploded, Leon still slashed at me without any hesitation.

The slash trajectory somewhat shifted thanks to the explosion. Moreover, I was pushed back so I managed to receive only a light injury.

However, I managed to fix my stance.

I had a complicated feeling of both admiration and a sense of defeat when I looked at Leon.

The defense and offense right from the beginning to the present; Leon was perfect.

If you talked about our original combat capability, I was confident that I was still far above him.
But, what was the reason that I was being overwhelmed like this?

I think that it was surely the resolution.

The resolution to win by putting everything you had on the line and to defeat the opponent in front of you. A resolution that you had to win.

Up until now, I was thinking that this tournament would be a peaceful one.

However, Leon was a Hero and he was on the way to accomplishing the Demon Lord subjugation, thus he had the resolution of a hero.

That was why, even if his Holy Sword got broken, his resolution wouldn’t waver and he wouldn’t stop the battle because of such a thing.

A man with a resolution like that, it was often the main reason why he could win against a tough opponent.
That, since I was a Hero, I understood it well.
It was because I had a resolution like the one Leon had now that I was able to defeat the Demon Lord.

It was not like I wasn’t serious, I wasn’t underestimating Leon or anything.
However, the resolution which Leon had now… I don’t have it.

As a result, I was probably just underestimating Leon in the end.

I breathed out slowly and started all over again.

I had understood Leon’s resolution.
It was fortunate that I noticed it before I was defeated.

Then let’s prepare myself.

And let’s apologize for the broken Holy Sword.

Leon didn’t reply back to my words.
Of course, the meaning was unknown to him with me suddenly apologizing.

That was why this was for my own self-satisfaction.

But Leon seemed to have noticed that my atmosphere had changed, he gripped his Holy Sword tightly.

I began pouring magic into the sword that I was holding. 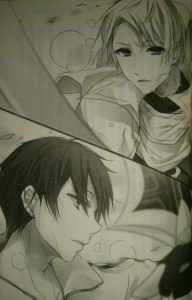 And then, Leon and I dashed at the same time.

As our swords clashed intensely, the blade parts chipped just like I had expected them to.

However, this time I won’t stop.

Our swords clashed again and again.

There was no room for me to imagine and activate magic.
Right now, we were single-mindedly focused on our opponent.

In the end, after doing it for a while and clashing intensely at the center of the stage, Leon’s and my sword broke at the same time with a loud sound.

Both blades had broken and crumbled from the root, if it was given another momentum, it was likely to be completely shattered.

But those things didn’t matter now.

Leon threw away the sword handle that remained in his hand like it was an eyesore.

I threw the handle of my sword at Leon.

Ever since the final match started, this was the first time Leon got shaken.

Leon used the armor on his arm to guard against the handle of sword that I threw.

I wasn’t aiming for damage from the beginning.
However, you had just made one fatal mistake.

At the exact moment Leon repelled the sword handle, I threw out my fist to Leon’s belly.

The fist that was partially boosted by magic pierced the armor.
The armor part that I hit was crushed and my fist reached Leon.

Receiving the direct hit to his body, Leon’s body bent down.

When Leon’s face was falling down, I drove in another uppercut at him.

*Bagon!* The loud sound echoed and my fist landed on Leon’s face and blew him away for two rotations.

There was a *gakon!* sound when Leon’s armor knocked against the stage floor and Leon landed with his face turned up.

I went immediately to Leon, mounted him and tried to land another blow.
…But, I stopped my hand.

It was because Leon had already fainted after receiving my upper-cut.

After I confirmed that Leon had fainted, I exhaled deeply and adjusted my breathing.

When I stood up, I sent a glance to the referee.

The referee… along with the audience, were looking at me with absent minded faces.

And at the moment that I thought so, the venue was surrounded by cheers and in the resounding applause, my victory was announced.

Just a passing-by translator, who happen liking isekai novels. Return of The Former Hero is one of my favorite novel. I hope I can deliver the joy of liking this novel to you all.