Is it better for the Demon King to be a carefree idle bum? I guess it depends on whether you consider the person to be an ally or not.

As for the Demon King who says that with a huge smile, first of all I’ll kick her to the ground.

「Meanie! You’ve got this beautiful girl visiting you, and yet your welcome response is a kick of all things!」
「I didn’t call you. Leave.」

To the Demon King who is rather deliberately cowering on the floor with her hand covering her face in sad pose, I repeatedly kick her over until she’s driven out from the room. I shut the door and take a breath. What did she come for anyway?

「Okay, okay. This time I’m seriously asking you to bring me along. You’re just about to go to the Divine Word Religion, right?」

Opening the door I had just closed, the Demon King re-enters while spouting that nonsense.

「It’s not the sort of place I can take a NEET to.」

The Demon King is taken aback, so much so that I can almost hear a “kadoom” sound effect.

「Even Shiro-chan is denouncing me as a NEET huh……」

You practically are a NEET though, aren’t you. Balto is doing almost all the work after all.

「If it comes to that, then I’ll have to destroy the world by myself!」
「Quit it.」

If the Demon King got serious she pretty much could do so after all. Even for a joke that’s no joke.

The Demon King freezes for a short while.

「It couldn’t possibly be, that Shiro-chan seriously thinks of me as a useless NEET, right? Right?」

It seems that she has real tears in her eyes, but what am I going to do about her now? Seeking some assistance I glance at Felmina-chan, but she’s organising some documents while giving off an “I’m in the middle of work” vibe. I get a strong feeling that she doesn’t want anything to do with this. I kinda get the impression that this girl has gotten a bit impudent lately.

「Oh? That’s the girl that you picked up, Shiro-chan?」

「Pleased to meet you. I am called Felmina. I do not have a family name.」

Despite having kept up that “no concern of mine” attitude until a moment ago, she gives a polite greeting without showing any reluctance on her face. Just what you’d expect of an ex-noble. She has no family name because she’s an “ex”. Though she has none, she has a perfect iron wall cultivated behind that ladylike greeting. However, I bet on the inside she thinks that this is a bother, no doubt.

「Hiya. Thanks for your consideration. I’m Ariel. The Demon King.」

At the Demon King’s self-introduction, Femina-chan’s movement instantly stops. She glances towards me, so I give a slight nod.

In order to stop the Demon King from noticing, I address her. Worrying about her subordinate’s heart, I’m such a kind boss. Yet despite that, Felmina-chan’s heartbeat speeds up even further. Incomprehensible.

「No no no! Shiro-chan, I’ve already been asking since earlier, right? If you’re going over to the Divine Word Religion’s place then I’m coming too okay – I’m pretty sure I’ve said it many times already though!?」

Ah, that wasn’t a joke but genuinely seriously honestly then huh. I’d been convinced that this NEET wouldn’t want to work. So-o-o sorry. However, to think that this NEET would actually be willing to work, perhaps this is an omen that the end of the world is nigh? Oi, what the hell is Gyurigyuri doing!? The world is in crisis!

「Hey, you better not thinking something incredibly rude okay?」

Nothing of the sort. Even if what I really was thinking was rude she wouldn’t be able to realise it. Well, I guess there’s no problem in bringing the Demon King along too. I bet she wouldn’t work even if I left her behind. She’s a NEET ya know.

No help for it then but to add the NEET as another member to our Divine Word Religion attack squad. When I had tentatively asked vampire girl and oni-kun they had both indicated that they would be able to go. When I asked Felmina-chan if she was coming just in case, she gave a Japanese-like humble refusal of “Unfortunately I’m wouldn’t be of much use”, indicating that she had no intention of going. I somehow felt that it could be rather interesting to forcibly bring her along, so after a nod I condemned her with “I’m sure that’s not the case so let’s go”. Condemned to death by coercion. You can only answer “yes” or “yes, sir”. You have no right of veto! I’m sure it’s just my imagination that behind the iron wall her ladylike smile is twitching.

Thus, bringing the Demon King and Felmina-chan along we leave to pick up vampire girl and oni-kun. In the process, we ran into Balto’s younger brother the hoodlum. This guy shouldn’t normally be in the castle, but why do I keep running into him so frequently? It seems he noticed us as well and he looks at me. He probably doesn’t intend to, but since he has an unpleasant look in his eyes by nature it feels like he’s seriously glaring at me so I wish he’d stop that. As if granting my wish, the hoodling shifts his gaze from me to fasten onto the Demon King beside me. His expression becomes grimmer. It seems like he wasn’t really glaring at me after all. The gaze he has focused on the Demon King could certainly be called a real glare.

「Bitch, where do you think you’re going?」

The hoodlum has started a eyeballing match!

「Surely it’s my choice to go wherever I want?」

「Aniki is working without even time to sleep, yet you’re on a carefree stroll huh?」

Almost as if I can hear a “breaking” sound effect, I can tell that the hoodlum has snapped. I can almost see a vein popping on his forehead.

The place we’re about to go to is certainly not for playing, but even if we said so the hoodlum wouldn’t accept that huh. On the contrary, even if we told the truth it would probably cause a needless misunderstanding. After all, we’re basically going right to the center of the enemy camp.

While demanding to be saved the Demon King clings to me without even the merest hint of fear in her voice. Bug off. However, I don’t have any spare time either so I can’t waste time arguing with the hoodlum here.

「Hey, there’s no need for you to stay under someone like this. If you’re annoyed then clearly say that you’re annoyed.」
「Annoyed.」

It burns me to do as the hoodlum says, but I hate being clinged to so I tear away from her after saying that.

Well, whatever. Maybe I should leave this thing behind after all. It’s gotten annoying in all sorts of ways, so I ignore both the Demon King and the hoodlum and walk off.

Ignore, ignore. I guess the hoodlum gave up and doesn’t follow, but the damn Demon King grabs around my waist while following. Hey, my spine will break. I’m a bit irritated so I kick her to the ground. I seriously thought about just leaving her here, but it can’t be helped so I grab her by the scruff of the neck and drag her along. It hasn’t even gotten to the main event yet, so why do I have to be so worn out like this? I can tell that it’s going to be a gruelling day.

You can only answer “yes” or “yes, sir” – this is about the closest equivalent in English. In Japanese the two options given are literally はい (hai, yes in Japanese) or イエス (iesu, which is the phonetic spelling of “yes” in Japanese).

It’s onomatopoeia theatre today with two direct references to specific sound effects. First up is “gaan” (kadoom) which is used to express shock or despair, generally with a comical undertone: 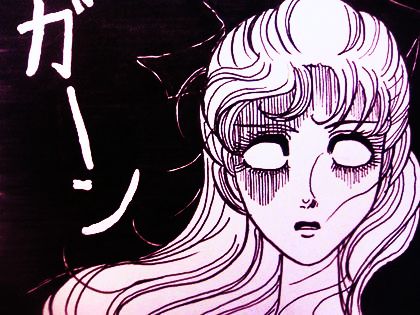 Next is “bikibiki” which is normally quite general purpose for something grinding, scraping or breaking but here it’s more for someone’s temper breaking: 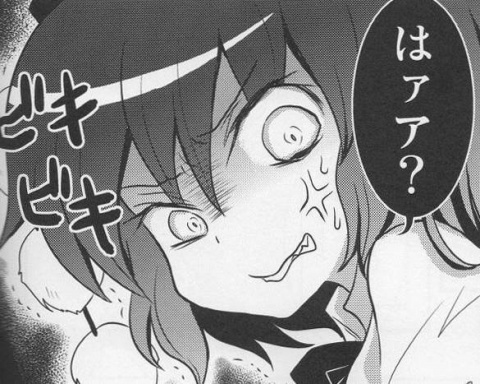